As a Sandwich Mesh Fabric Manufacturer, share with you. 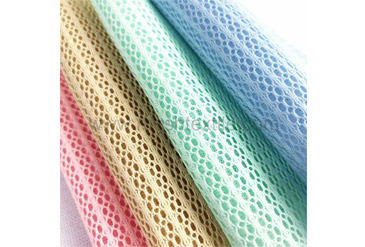 (3) Anti-needle sewing course: the form of alternating positive and negative. Due to the elastic force of the yarn, the loop is inclined in the longitudinal direction to shrink the fabric, so that it protrudes on the surface of the fabric in a circular arc, resulting in negative externality.

2. Changes in the organization of single-layer mesh cloth

(1) The change of the flat needle organization: two flat needles are arranged longitudinally. The use of two kinds of yarns can form a white vertical striped fabric. The number two jerseys with different widths of colored stripes are alternated in wales.

(1) Single jacquard yarn and white: an organization composed of two or more different colors arranged in a row.

(3) Establish a unit circle through the circle organization: set the unit to form a concave-convex small hole effect.

(5) Electroplating of all loops: It means that all fabrics are formed by overlapping two loops of the loop, the yarn of the fabric is displayed, and the other side is displayed by another line.

The single-layer mesh fabric embroidered yarn and weave will cover the loop part of the fabric with the same or different colors, arranged in a specific pattern and formed.

Our company also has Sandwich Air Mesh on sale, welcome to contact us.

Share
Previous None
Next What is the Difference Between Mesh Cloth and Sandwich Air Mesh?